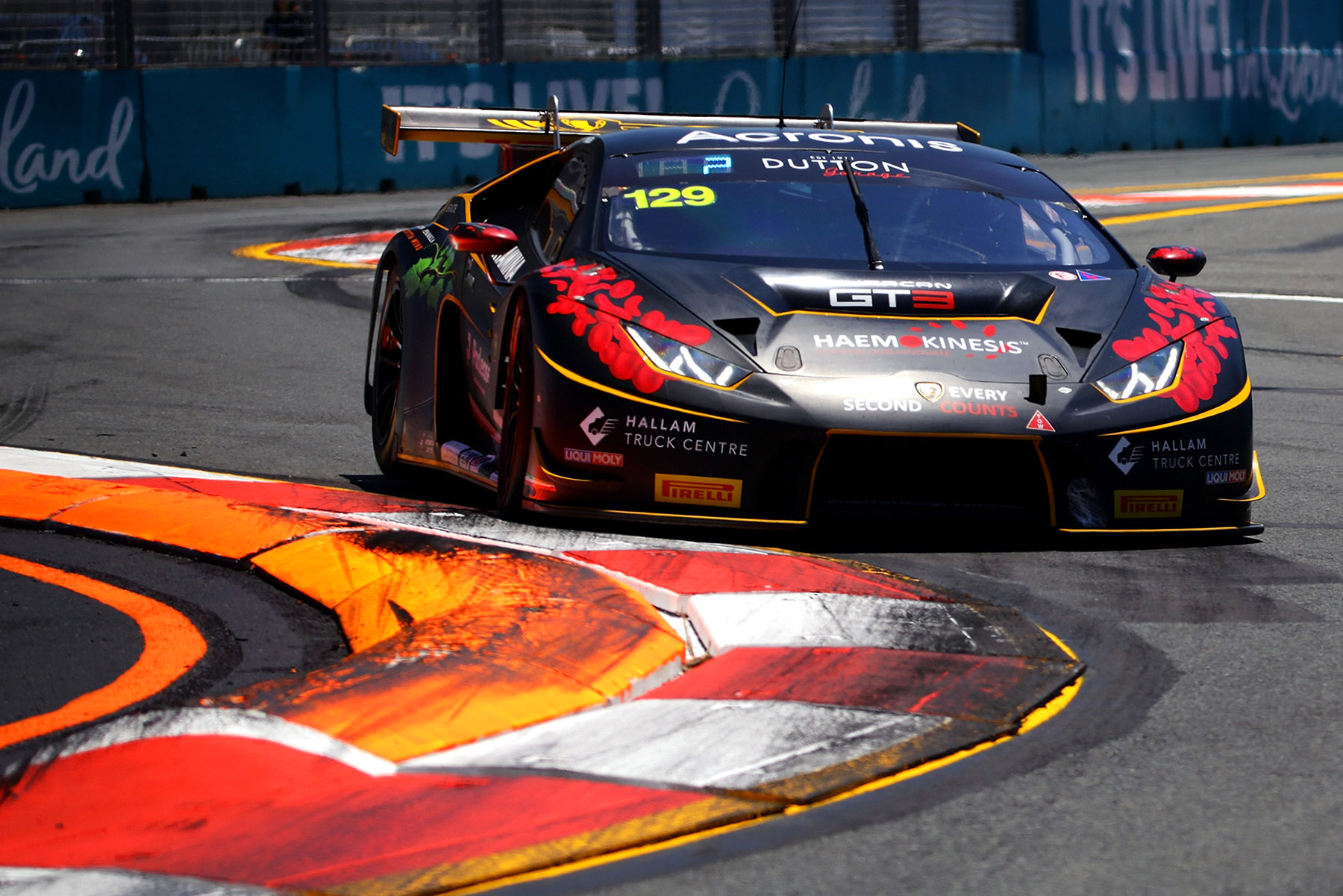 Ross had led into turn one and held an eight second lead heading into the compulsory stop, but a small brake fire in the left front wheel slightly delayed him in returning to the circuit allowing both Millier and Peter Hackett to move ahead. Ross was clearly untroubled by the setback, breaking the lap record by four tenths of a second soon after, however he was unable to get through on his rivals, settling for third at the flag.

In the title battle Hackett’s result saw him further eat into the points lead of Audi #1 Geoff Emery, the reigning champion lamenting a tough day where he finished a lap down on the leaders and just ninth outright.

Race#1 (60-minutes)
Ross led the field around for the rolling start getting the jump on Millier on the run down to the first chicane where Peter Hackett was faced with a determined Tony Quinn, the Aston Martin driver holding station to go side-by-side with the #63 Mercedes through the tight first sequence of corners, making light contact in the process.

Hackett was quickly through, but behind him his title rival was caught up leading a pack of cars that seemed to have found better pace than the championship points leader, Emery ultimately falling back behind the MARC cars of Broc Feeney and Geoff Taunton ahead of the pit stops, his best of 1:15.2532 an indication that all was not right with the title winning Audi, Emery admitting afterwards that he was losing significant time on the run along the beach.

As the quickest car on the circuit, Ross extended his advantage with every lap to pit with a lead of more than eight seconds, and whilst on track to meet the strategy set by his team, a small fire in the left front brakes saw action from the fire safety crews which slightly delayed the stop, effectively negating any advantage, Ross leaving pit lane third in line behind Millier and Hackett, the Lamborghini inheriting the lead once all the stops were completed.

Ross was on a mission straight out of the gate and with a fresh set of Pirelli DHD2s all round, he charged to close down the leaders, his pace evident as he went about lowering Allan Simonsen’s seven year old lap record by four tenths of a second to close onto Hackett’s tail, but despite the advantage and the addition of lapped traffic, he couldn’t find a way past in shades of Sandown just a month ago.

Ultimately Millier was able to hold on to his lead and extend his advantage to more than three seconds as Hackett went into defence mode over position two, the Trofeo Motorsport Lamborghini driver going on to gift the team their second win of the year, with Hackett earning a good haul of points with second.

A late setback for Ross whilst trying to cool off his tyres for a final late push against Hackett saw him fighting to keep the car off the barriers at turn 13, in the end he elected to drop the pace and accept the bottom step of the podium.

Tony Quinn crossed the line fourth after a lonely race, the series veteran showing signs of his customary pace in amongst the traffic, although he admitted he would have been happy to pull stumps at the 40-minute mark, the warm ambient temperatures clearly having an affect on driver comfort.

Geoff Taunton led home a quartet of MARC Cars after the early advantage ahead of the stop was held by Broc Feeney, the Mustang pilot leading home Adam Hargraves, Feeney and Bayley Hall, with all four of them classified just a lap back from the leading GT3 cars.

Despite finishing just ninth, Geoff Emery was classified fifth in the GT3 Championship points, although the result and his third row qualifying effort saw him lose 27 points to title rival Hackett, and frustrated at a distinct lack of pace.

“I don’t know what the issue is, but I’m not enjoying being this far back down the pack,” Emery admitted. “We’re going over the data now, but whilst I’m playing the championship points game, there’s no joy being stuck back in the pack, I’m here to race and I’m keen to be on the podium, so we’re looking to make a big change for tomorrow.”

Dale Paterson had initially been classified as tenth and leading Trophy Series entrant in the thundering Camaro despite brake issues and a few runs through the chicane as the brakes began to suffer in the heat, but a pit stop infringement saw him penalised post race dropping him to twelfth, handing Joseph Ensabella tenth and the top honours in the Trophy class battle.

Peter Corbett’s Australian GT debut netted a third-placed result in Trophy Series, the local Lamborghini Gallardo driver admitting he’d loved the experience despite having to spend much of the race watching the mirrors, although he was able to cross the line to complete the full 60-minute journey, whilst Richard Gartner in the Safe-T-Stop Gallardo suffered a late race setback as he was being lapped by the leader.

Coming into the closing laps the leading trio had caught a big group of cars fighting for position, Gartner ultimately caught on the run through the final corner by both race leader Ryan Millier and MARC Cars driver Adam Hargraves.

Millier moved to the inside on the run onto the main straight, Hargraves giving him racing room, but on doing that the Mustang moved across onto the nose of the Gartner Lamborghini forcing him to make contact with the outside barriers – it wasn’t a huge contact, but it was enough to force Gartner into pit lane and retirement, the team hoping to find enough spares to repair the car ahead of Sunday’s second race.

The battle for GT4 honours initially saw Trent Harrison holding an almost 15-second advantage over team-mates Justin McMillan and Glen Wood, but ultimately Wood was able to put his 2018 Gold Coast experience (Carrera Cup) to good use, punching out a sequence of quick laps over the second stanza of the race to catch and pass Harrison on the final lap.

Todd O’Brien’s Australian GT debut netted a third placed finish, the local driver though suffering heat exhaustion post race, fortunately after medical checks he was cleared and back at the circuit planning for Sunday’s second race.

With more valuable championship points on the line during Sunday’s second race, teams will have another opportunity to enjoy the challenging streets of Surfers Paradise, and with conditions again expected to by sunny and dry, they will have their work cut out for them come 10:35am local time..

What the drivers had to say..

1. 129. Ryan Millier (Trofeo Motorsport Lamborghini Huracan GT3)
“It’s a great opportunity to get back in the car, normally I’m on the tools as team manager for the team, but I’d like to thank team owner Jim Manolios for the opportunity, it’s an exciting result for the whole team. From this point on though I’d like every round of AGT to be on a street circuit, I absolutely love it.”

2. 63. Peter Hackett (Eggleston Motorsport Mercedes-AMG GT3)
“We struggled a little bit early on, I was a bit conservative after that contact with Tony [Quinn] at turn one, I wasn’t sure if it had pulled the toe out on the car or done any damage, so it took a couple of laps to make sure the car was okay. We’re not here to come second, but there were a lot of backmarkers and a lot of risk out there, so we did the best we could today. They were [Manolios] quick, they’d put greens [tyres] on which is probably why I couldn’t quite match him – we’ll go for greens tomorrow ourselves at some point but we’ll go back to data as we’ve seen things today we’ve not seen before, so we’ll tune it and come back stronger for race two.”

3. 59. Fraser Ross (59Racing McLaren 720S GT3)
“It was a bit disappointing during the stop, that really messed up the strategy with the added delay, but once in clean air the car was fastest on track, but in traffic things started to get a bit hot. We had a good car, I made a bit of a mistake towards the end trying to keep the tyres cool because I was trying to keep them good for tomorrows race – but I think we proved in the first leg of the race that we’ve got the pace to go after the win.” 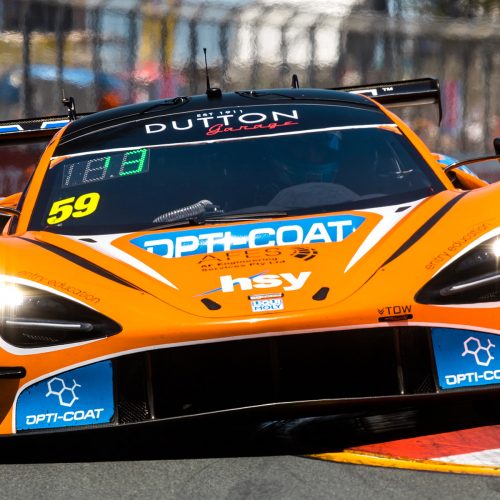 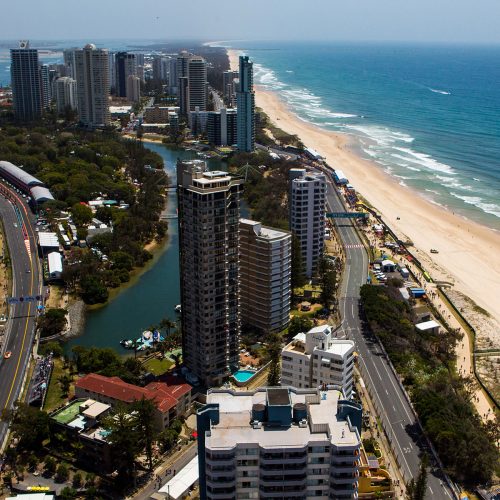