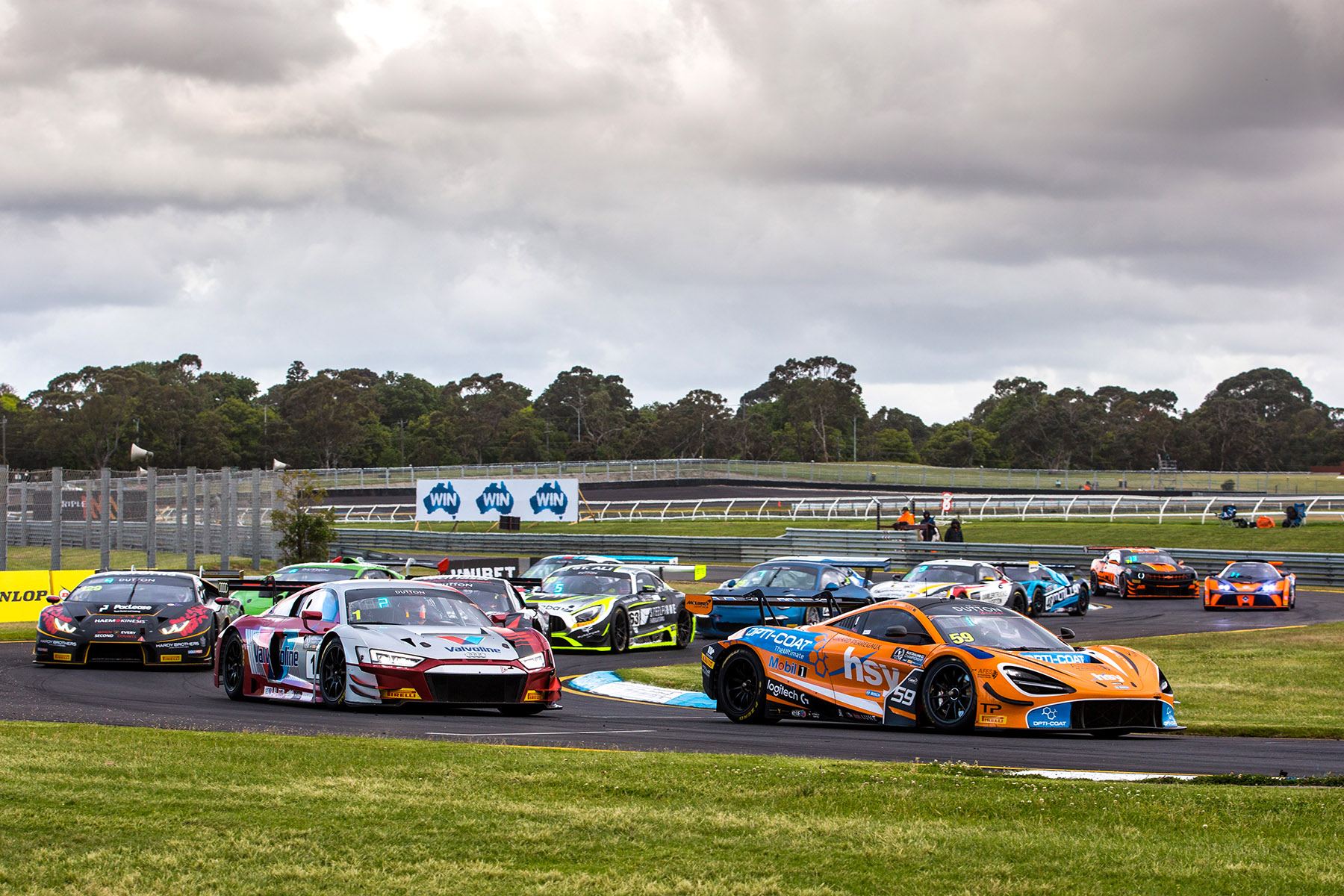 Sandown provided just about everything during the opening day of action for the Australian GT season finale – challenging weather, an interrupted qualifying session, and a very condensed opening race all serving to test the title contenders, but once the action was over, there was a familiar face back in victory lane – Peter Hackett carding his third consecutive race win at Sandown to keep himself right in the title fight heading into the final two races of the year.

The weather was the big feature, but unlike September’s endurance season final, Australian GT managed to just avoid the thick of it, although track conditions were far from premium, allowing Fraser Ross to retain his new lap record.

Sadly Q2 saw an early red-flag prompted by an off for Tony Bates on slick tyres at turn 2-3, whilst a medical emergency for a member of the media on track saw the session red-flagged with just four cars recording a lap time.

The drama though continued with a long delay to repair the Armco barriers at the top of the circuit after a big off during a support category event just 30-minutes ahead of the scheduled Australian GT race, forcing a delay of almost an hour.

With the duration shortened to just 20-minutes – still with Compulsory Timed Pit Stop – the teams hit the circuit for the opening race, a spirited opening lap ultimately saw Ryan Simpson charge off into the fading light to pit well clear of the field, but a setback during the pit stop allowed Peter Hackett to grab the lead, the #63 Mercedes-AMG extending his advantage to lead home the returning Mark Griffith and Liam Talbot.

After a storming start from rear-of-field, Dale Paterson was forced to settle for second in Trophy Series behind the impressive Joseph Ensabella, whilst Gold Coast round winner Ryan Millier took Trofeo Motorsport’s Huracan Super Trofeo to top honours in Trofeo Challenge, and Dean Koutsoumidis grabbed the win over team-mate David Crampton in GT4.

QUALIFYING
With teams having contested just a shortened 30-minute practice session (to recover Dale Paterson’s stricken Camaro GT3 from the exit of Dandenong Corner after an oil line came loose spraying oil onto the rear tyres – fortunately repairable) ahead of qualifying, they were all understandably fired up for the two 15-minute sessions from which the fastest lap time from either session would set the grid for the opening race.

On a drying circuit the early laps counted for little, but as the 15-minute mark drew closer, the times began to drop, an epic three-way battle in the dying seconds won by early pace-setter Ryan Simpson in the 59Racing McLaren, whilst points leader Geoff Emery and Audi team-mate Tony Bates also threw their hats into the ring, Emery ultimately claiming a time good enough for a front row start, pipping Bates by a mere eight one hundredths of a second..

Liam Talbot was also right in the mix, but traffic thwarted his pole opportunity, although he managed to get the better of the slower cars to drop Peter Hackett back to fifth, the Mercedes-AMG driver lamenting a missed opportunity in the constantly changing conditions.

Gold Coast round winner Ryan Millier – who jumped across to Trofeo Motorsports, Trofeo Challenge classified Huracan Super Trofeo – got the jump on points leader Nick Karnaros to take sixth, with Joseph Ensabella making it two Porsches on the fourth row – in the process taking top honours in Trophy Series.

Mark Griffith was unable to find clear enough space to claim a quicker lap in the #19 Mercedes-AMG GT3, settling for ninth ahead of David Greig and the M-Motorsport KTM X-Bows led by local driver Dean Koutsoumidis.

Sadly for the teams, leg two was over almost as soon as it had begun, with first Tony Bates off at turn 2-3 after the team elected to try him on slick tyres – it was too wet through the quick right-left complex, forcing Bates wide on the exit of turn three and into the tyres.

He worked as much magic as he could muster to find grip on the wet outfield, but despite ultimately recovering the car, he had forced the red flag, although it was clear the length of the intervention signalled a bigger issue.

Unfortunately, in an unrelated issue, a member of the media had prompted the medical team to usher in an ambulance to attend him at turn four – fortunately after a visit to hospital he was able to return home – the delay on the tight Supercars schedule though ultimately saw the cars on track for just a few short minutes prior to the red flag, with just four of them recording a time.

Fortunately for Fraser Ross, he was one of those four, giving he and Ryan Simpson their third consecutive pole position in the 59Racing McLaren.

RACE#1 (40-minutes)
Unfortunately qualifying wasn’t to be the only challenge for the teams, a big impact with the barriers during a support category ahead of Australian GT’s schedule start time saw a repair that took almost an hour, and with the clock ticking and a timed curfew approaching, teams were faced with a race length shortened to 20-minutes, and a Controlled Time Pit Stop that was cut to half the originally prescribed time.

With the weather closing in, but a dry track for the start of the race, the teams crossed the line for the rolling start with Tony Bates getting a great jump on the two front row starters to pull to the inside of pole-sitter Ryan Simpson on the run to turn one.

He forced the issue, dropping Geoff Emery back to third as they tipped in to the apex, but Simpson got better drive off the corner to pull alongside the Audi to have the inside run for turn three.

Sadly for the former race winner, he didn’t make it through Dandenong Road corner, the gritty local driver suffering a torn hamstring as he braked for the corner. Despite the pain he was able to recover the car and rejoin in fifth place, and battled the discomfort over the closing laps in a fasntastic battle with Geoff Emery and Fraser Ross.

With Bates back to fifth, Simpson inherited the lead, punching out a succession of fastest laps to open an advantage of more than 15-seconds by the time the four-minute pit stop window opened.

With little time to manoeuvre around the short window, most teams hit the pits early, whilst Liam Talbot opted for the long game alongside Simpson, the Lamborghini though suffering a left rear puncture as he got close to pit entry, fortunately losing little time in getting down pit lane to have the tyre changed.

Once the stops were done Peter Hackett emerged the leader after yet another pit-stop setback for the #59 McLaren – the door latch failing to hold the gull-wing door shut, forcing the team to remedy the situation prior to Ross’ departure – the delay destroying any advantage Simpson had given them.

Again the McLaren was the car to watch, Ross quickly back to lap times in the low 1:10s to charge through the field and work his way back into contention, catching the two Audis with just a handful of laps to go.

He caught the Bates-Emery train across the top of the back straight just as light rain began to fall, Bates unable to pull up the car as he got onto the brakes, ultimately using the runoff on the outside, whilst Emery surprised Ross as he braked earlier for Dandenong Road corner in the slippery conditions, the McLaren though still in full attack mode.

The pair made contact, but not enough to disrupt their track position, although Ross was through pretty quickly to close on Liam Talbot, but the clock beat him, Talbot across the line to third – albeit just seven seconds back from Mark Griffith who was beaming after a repeat podium to add to his Race#3 result at Barbagallo.

Up front though it was all Peter Hackett, the Mercedes-AMG driver turning in a flawless performance to take his third win of the year and close down Geoff Emery’s points advantage ever so slightly to keep himself in the title hunt for another day..

Emery recorded fifth overall for a solid haul of points, whilst Joseph Ensabella showed again the value of his recent performances in the Trofeo Motorsport Huracan to take his Porsche to top honours in Trofeo Challenge over Ryan Millier.

Dale Paterson admitted that he’d eased off the pace in the closing stages to be eighth across the line, the DPM team celebrating a return to form after their practice setback, Paterson explaining that he’d done enough to claim the 2019 Trophy Series title, and that he didn’t want to risk any further setbacks in what had been a memorable season.

Sadly for Tony Bates, his AGT return ended after the Fraser Ross move, Bates car coming to a stop on the circuit after the car went into shutdown mode after what the team traced to a likely oil pressure sensor failure. Unfortunately for Bates, his troubles didn’t stop there, the local driver having to be physically removed by his team with his leg injury making it all but impossible to walk, a scenario which saw him straight into medical care forcing his withdrawal from the weekend.

For the teams, they now prepare for the final day of the 2019 season, with two 40-minute races scheduled for Saturday, the first at 9:45am (AEDT), the second and last race of the season, at 3:20pm.

Keep up to date with Australian GT via the various social media platforms, and keep an eye on the TV Guides on both Fox Sports Australia (Channel 506) and SBS as they cover the two remaining races LIVE from Sandown.

What the drivers had to say;

1. 63. Peter Hackett (Eggleston Motorsport Mercedes AMG GT3)
“It was actually really difficult because we were in a mindset of 40-minutes with a strategy and pit stop window, then as we sat on the dummy grid they say it’s a 20-minute race and the compulsory pit stop time is now halved and it just changed the whole mentality. From there it was literally a sprint race, 20-minutes as fast as you could go.. The boys got their elbows out in turn one, Batesy got a great start and I wasn’t sure how that was going to play, then turn two got even more hectic and turn three they all backed up.. I don’t think I’ve seen a GT race in the first three corners like that where there was minimal contact, but we got through. The team were telling me ‘qualifying laps Peter’ we didn’t know what the weather was going to do or what a safety car was going to do, but we came away with the win..!

Dutton Garage Sandown GT Cup (after round one of two) – provisional 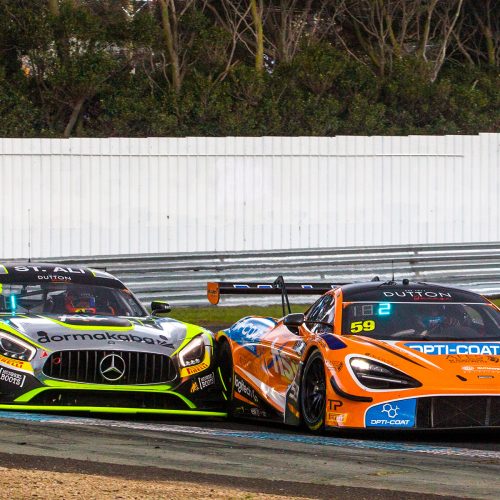 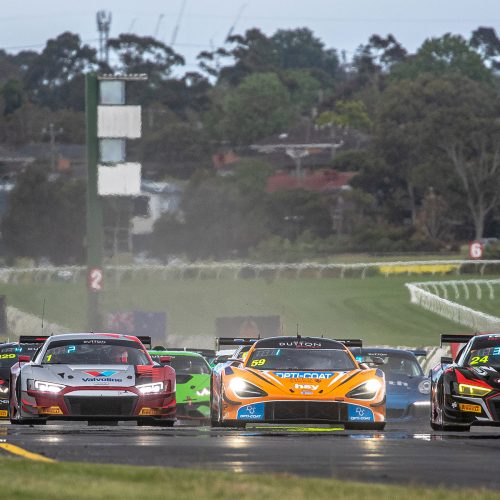