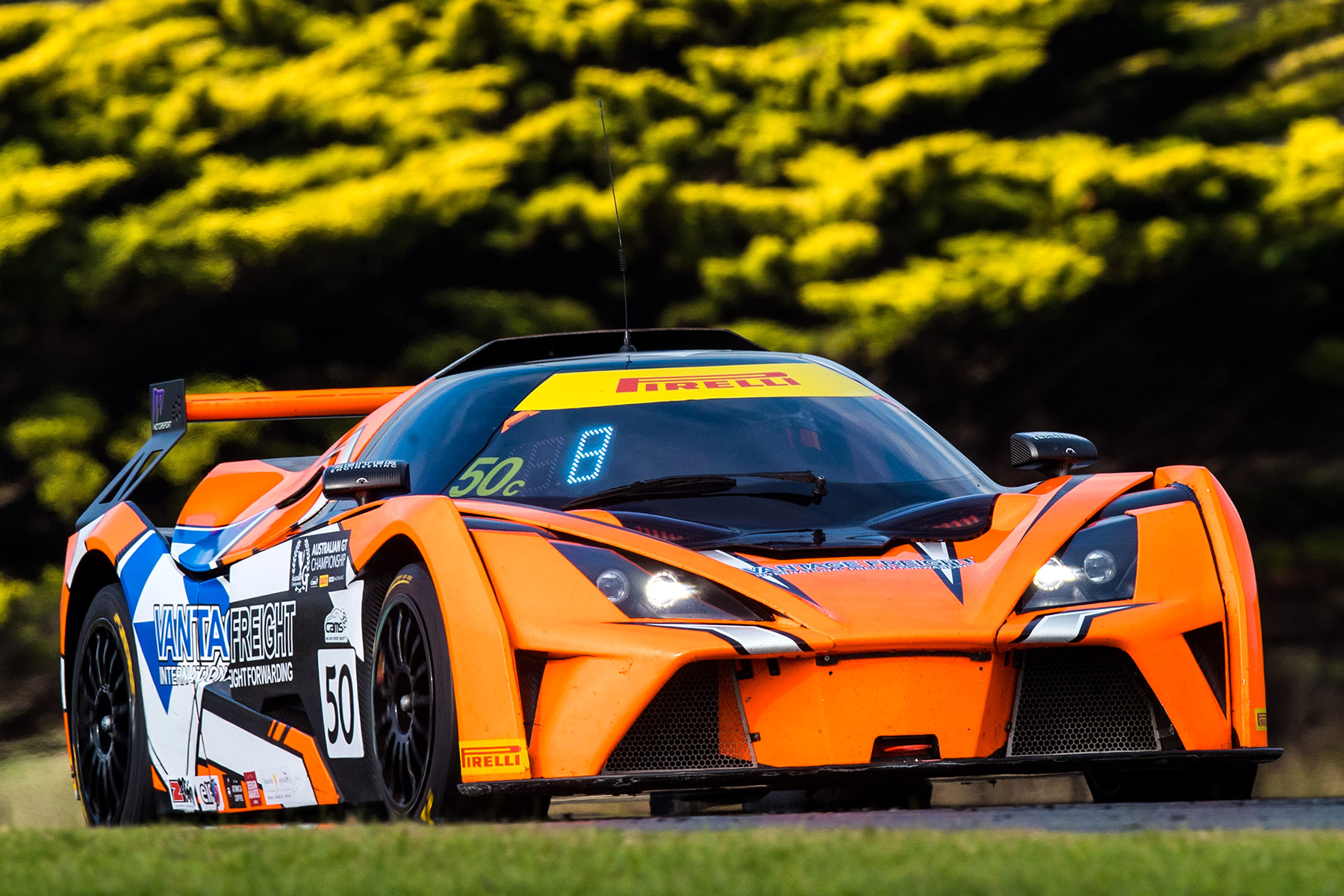 After two seasons in the mighty KTM X-Bow GT4, Sydney’s David Crampton is smiling wider than ever, and on the eve of an Australian Championship battle in which he and team-mate Trent Harrison are right in the title fight, it’s understandable that the duo are upbeat despite heading into Melbourne’s uncertain Spring weather..

As one of two cars capable of taking out the 2019 CAMS Australian Endurance Championship crown in GT4, Crampton knows he needs a perfect weekend as he tackles title rivals Justin McMillan and Glen Wood in an identical 2-litre turbo Audi-powered X-Bow, the M-Motorsport team-mates though whilst taking the fight seriously, will extract as many laughs as possible across what will be a challenging weekend.

“You can never say never, and whilst Justin and Glen are well clear in the points race after our early exit at Phillip Island [technical fault], if they suffer any setbacks, we’re right in the battle for the title,” Crampton explained.

Joining the Melbourne-based M-Motorsport operation to kick off the 2018 Bathurst 12-Hour, Crampton has been on a steep learning curve ever since, admitting that coming into Australian GT alongside a string of faster GT3 cars, has really forced him to tackle the issue head-on.

“Bathurst was a setback with me striking drama at Forrest’s Elbow early in my stint under pressure from some of the faster GT3 cars, and that was a real lesson,” Crampton continued.

“That showed me I should have been better prepared, and with Justin’s [McMillan] help, and guidance from Trent [Harrison] and Glen [Wood] I’ve taken every opportunity I can to be behind the wheel of the car to learn.

“I’m pretty happy with how things have evolved since then, and technical issues aside [Crampton was comfortably under Justin McMillan’s rear wing early at Phillip Island before a technical issue saw him in the barriers early during the opening round of the Endurance season], I think I’ve improved to the point where I can pump out the lap times we need to keep us in contention.”

Testament to that was Crampton’s epic effort in challenging wet and dry conditions at The Bend Motorsport Park, where they emerged with their first GT4 outright victory.

“That was incredible! We fought all day in both wet and dry conditions and into the setting sun to emerge as the leading GT4 car and take back valuable points we’d lost after the retirement at Phillip Island. We have to continue that form though and push the #48 car at Sandown so that we can put ourselves back into the title equation and be there at the end.”

With the addition of more cars into the GT4 field, Crampton’s other issue will be ensuring they maximise their result in relation to their title rivals, but as a fan of the challenging 3.1-kilometre, 13-turn Sandown layout, he isn’t too phased.

“I have to say that when I knew we were going to come to Sandown twice this year for Australian GT I was pretty happy,” Crampton continued. “It’s one of my favourite venues, and I’d seen a fair bit of success with my Radical SR3 there in the past with a string of podium finishes, so I do like it. That said, I need to make it through qualifying this time after battling a bit too hard with GT4 champion-elect Jeremy Gray at Sandown last year at turn one. I was perhaps a bit forceful in pushing my line and we both ended up out of the session, whilst I learnt a hard lesson again about attacking when it’s not vital, as we had to sit out both races having damaged the car enough to force a lengthy repair back at the workshop..”

Whilst this weekend will represent Crampton’s first chance to fight for a title in season 2019, he will get a second chance – again at Sandown – when the CAMS Australian GT Championship comes to its conclusion at the venue in early November.

“The seven round season has provided significant mileage and I’m improving with every run, so whilst there’s some chance we might miss the endurance title this weekend, we’re still in the fight for the GT4 Championship title with the two Sprint rounds at the Gold Coast and back at Sandown still on the program.

“We’ll be ready.. Our only issue is just how reliable the KTMs have been, and that our title rival is racing an identical car within the same team!

“Regardless, I’m having a blast racing in AGT alongside Justin, Glen and Trent. They are great guys, as are the crew, it’s more like a dysfunctional family than a team and we enjoy the racing – for me that’s what it’s all about.

“Yes we’re frustrated that there aren’t more teams in GT4 this year, but the signs are there that 2020 might see that change, and I for one certainly hope so. These cars are fantastic, budget-wise they are affordable and with a good field of GT4s the racing is fantastic. Look we’re [KTM] not the fastest car in a straight line, but boy do these things corner well. They’re a very physical car to drive, but they are just the most fun you can have behind the wheel – it’s the best decision I ever made coming into the X-Bow.”

And the feeling has been mutual.. Recently Crampton was in Europe on vacation and offered an opportunity to test drive the all new KTM GTX at the Salzburgring in Austria by Reiter Engineering with whom M-Motorsport have a fantastic relationship. A concept GT car that won its class on debut at the recent Barcelona 24-Hours, the car campaigns a 2.5-litre, 5-cylinder Audi engine capable of some impressive lap times.

“Wow, was all I could say afterwards,” Crampton admitted. “It was much faster than the highly restricted GT4 car, but so easy to drive. I did something like 70-kilometres and it felt like 15, and it was so comfortable to drive. I was honoured to have had the experience.”

For Crampton and team-mate Trent Harrison though, focus for now turns to Sandown where track action begins on Friday (20 September) with a solitary practice session at 10:10am, ahead of qualifying at midday on Saturday and the opening one-hour leg of the endurance championship at 3:30pm. The remaining two one-hour legs will come on Sunday at 10:35am and 4:50pm respectively, the top point scorer for each of the legs classified as the round winner in both the GT3 and GT4 categories. 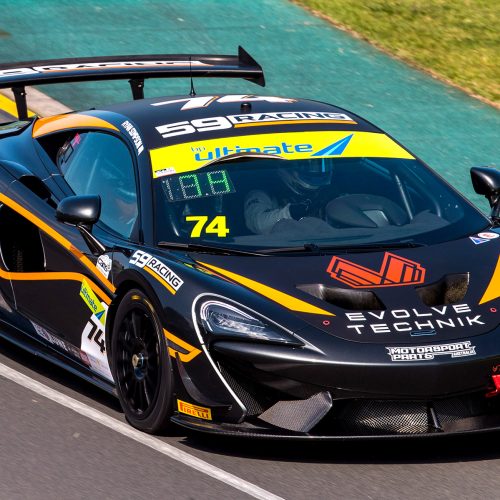 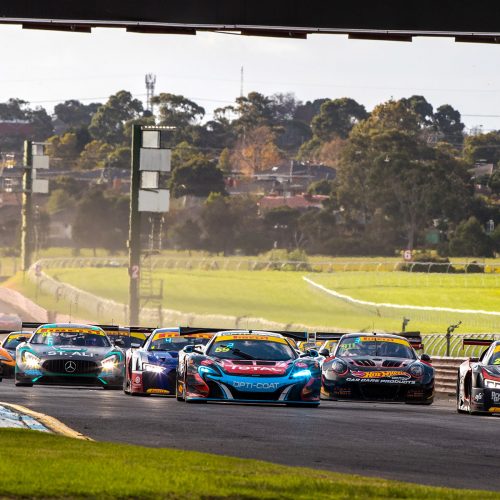